Status of ITS resources

[an error occurred while processing this directive] 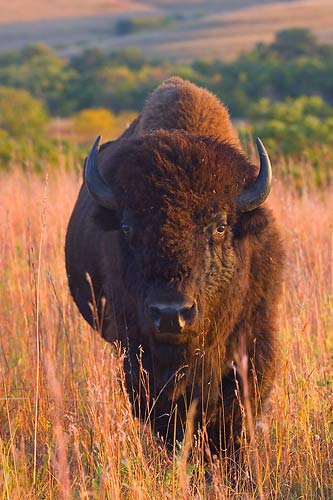 Historically, bison were the primary grazers of the prairies and played a keystone role in the ecology of the grasslands.  In 1987 thirty animals donated by Fort Riley Military Reservation were introduced onto Konza Prairie. Herd size increased over the years through reproduction, additional donations, trades and purchases. On Konza Prairie the standing bison herd averaged 300 from November of 2005 to November of 2011. The land designated to the herd is about 2400 acres of fenced tallgrass prairie. The herd is part of the long-term ecological research of Konza Prairie Biological Station where fire, grazing and climate are studied in the tallgrass prairie ecosystem. Grazing is an important ecological process. The effects of bison behavior are of interest as they graze and live as naturally as possible on the prairie. Therefore the herd is not supplemented by man and does not receive the kind of care that domesticated cattle require to survive. Cows weigh about 860 lbs and bulls 1800 lbs. Old bulls, especially those on supplemental feed in private herds, can reach 2000 lbs.

The number of calves born from November 2005 to November 2011 averaged 90. Calves weigh about 50-60 lbs. at birth. The calving rate averages about 66%, ranging from 44% in 2004 to 83% in 2007. (Cows are of reproductive age at 3 years and older.) Mature cows generally produce two calves in a three-year period. Severe winters can reduce calving rates significantly. The number of female and male calves born each year follows the expected 50:50 ratio. A newborn calf may begin to suckle about 20 minutes after birth. After a long drink of about 30 minutes the calf is able to follow it mother as she drifts away from the birth site.

A roundup takes place in October or November at Konza Prairie. New calves are ear-tagged and weighed. All calves are kept through their first year. Some older animals are culled during roundup by a process resembling natural attrition. Both young animals and old, low-vigor animals and excess males are removed for sale at a regional bison auction and to private buyers. Sale animals are tested for brucellosis. Other data on bison health have been collected by the Kansas State University veterinarians.

All KPBS bison calves receive ear tags at the fall roundup when they are about six months old. The tags are numbered and color-coded to keep track of the age of the animal, its origin and affiliation to other members of the herd. The color of the tag designates the decade of birth, for example, white tags represent the years from 1990 to 1999, whereas yellow tags represent animals born from 2000 to 2009, and orange tags indicate animals born in 2010 or later. The first number on the tag is the year of birth. The following two numbers are the individual's ID.

Herd management on Konza Prairie is all about having a standard grazing effect on the prairie ecosystem. Light grazing intensity is set at 25% removal of annual aboveground plant biomass in a 12-month period. Unlike most cattle operations in the Flint Hills of Kansas, bison remain on the prairie year-round. In the Flint Hills yearling cattle graze from May through September and generally are taken off pasture in October and sent to feed lots to finish. Although it is difficult to directly compare the two types of animals, grazing comparison trials of bison and cattle have been ongoing for 10 years. To accurately compare bison to cattle, weight, not age, is the important factor. Bison grow more slowly than domestic cattle. Two-year old bulls weigh about as much as yearling domestic cattle. Comparison trails are based on weight gains in the May to October (five months) growing season. Bison and cattle graze in separate fenced areas with equivalent stocking rates. Cattle are from the cow-calf herd of the KSU Department of Animal Science. Although there are some differences in how bison and cattle affect prairie vegetation, most of these differences are due to how the animals are managed. Cattle kept on pasture over winter are fed where bison are not. Unsupplemented bison tend to loose about 11% of their summer weight during the winter. Unsupplemented domestic cattle would die. Suckling calves will gain about 3% during the winter.

Bison and cattle are not functionally equivalent. Bison maintain large grazing lawns. They return again and again to the same "lawns" to eat the new growth of grass, which is highly nutritious. These areas may look overgrazed but actually have new growth continually, providing the nutritious grass bison need, even if only one inch high. In moderately stocked pastures, cattle tend to graze smaller patches distributed more uniformly throughout the pasture. Plant diversity is greater in bison pastures than in cattle pastures. Forb numbers, especially annuals, are higher in bison pastures. Both bison and cattle primarily consume Big Bluestem, Little Bluestem and Indiangrass on the tallgrass prairie. Cattle remove about 46% of the annual net primary production of the grasses while bison remove about 54%. 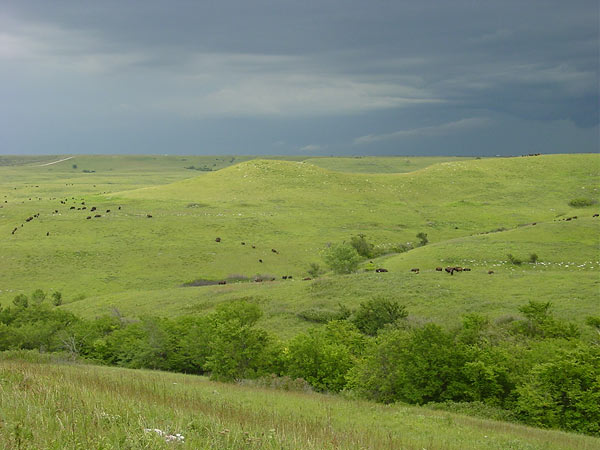 Millions of bison once roamed the Great Plains from what is now Canada south through the United States and into Mexico. Native Americans relied heavily on bison for food and utilized virtually every part of the animal from bones to hair. By the late 1880's, however, bison were driven almost to extinction due to the pioneer settlement of western North America. Waves of trappers and traders killed millions of bison for their hides and meat, highly desired in the east. Bison were also killed for sport, their carcasses left on the prairie. Later the bones were gathered and shipped east to be ground up for use as phosphorous fertilizer or bone char. White settlers clashed with the Native American residents over land, and the U.S. government promoted the slaughter of bison as a way to devastate the Native American's way of life. In Kansas by 1870, bison roamed only the western half of the state, and within the next 10 years bison herds were virtually gone. The last bison in Kansas was killed in 1886. Today through management, bison have made a comeback and approximately 200,000 exist in national parks, preserves, tribal lands, zoos and private herds.

The largest native mammal on the North American continent, Bos bison is named for its cousin from north central Europe. The name comes from the Germanic word, wissant or wisent. The ancestors of the European bison once roamed most of Europe and the steppes of Asia but in recent times the wisent is found only in certain parts of Belarus, Poland, Ukraine and a few other areas. They prefer wooded or mixed-forest habitats where they browse on forbs, leaves and shoots of woody plants, lichen and grasses. Much of their behavior is similar to the North American bison but they are somewhat smaller in size. The European bison is considered endangered.

The American bison is a shaggy-maned mammal with a large head, heavy forequarters and a large, muscular hump. The great herds once grazing the grasslands of North America were first seen by Cabeza de Vaca and members of the Spanish expeditions in the 1530's. Journal notes of one of Coronado's captains stated that they had to wait four days for a herd of wild "cattle" to cross a river in the Texas/New Mexico region. Several horses were lost during the encounter. The bison were hunted with spear and rifle by the Spanish, who likened the meat to the best cattle of Castile in Spain. Europeans later called them "buffalo" after the Asian and African wild oxen known to them. Some say the word originates from the Latin, bos (a head of cattle) from which came the French, boeff , from which came the English, beef.

Bison are gregarious animals moving constantly in herds, searching for new grazing areas of their favorite food, grasses. Buffalo Grass and Blue Grama are their preferential forages, found most abundantly in the drier mixed and shortgrass prairies of the Great Plains. Other grasses, like Big and Little Bluestem, Indian grass, Switch grass, Side Oats Grama and other grama grasses are eaten as well. The nutritional value of the grama grasses is high, even in the winter.

Like other related ruminants, bison have a four-chambered stomach, specialized for digesting high cellulose plant material with the help of fermentation by protozoa and bacteria. The teeth have evolved for grinding. Bison spend much of their time resting and ruminating, regurgitating and chewing their cud before moving the material on to the last two chambers of the stomach.